FIELD REPORT: Check-out what Pierre-Loup has been up to in Cooper Island

Pierre-Loup went to spend a few weeks in Cooper Island to work with George and his team on our guillemot friends. Read the report of this year's situation here . Started well... Ended up not that good!
Post a Comment
Read more

George speaks about the guillemot... and SENSEI at the NOAA's Arctic Report Card 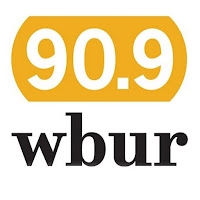 George was live on the U.S. National Public Radio show, On Point , based at WBUR in Boston, Massachusetts. Together with Karen Frey, lead author of the "Arctic Ocean Primary Productivity" chapter in this year’s NOAA Arctic Report Card, they described how the Arctic has been warming, pushing The Region — And Planet — Into Uncharted Territory! And George nicely advertised the role that SENSEI played in helping him continue his research with the assistance of foreign funds...
Post a Comment
Read more

NEWS FROM THE FIELD: A poor breeding season on Cooper island? 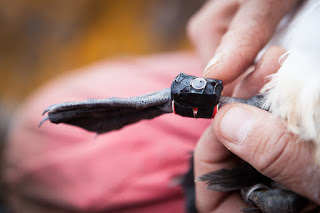 George is finishing up his second week on the island and the news are not super positive. There has been an extremely late snowmelt and guillemots laid eggs as late as they did in the 1970s: the first egg was seen on 24 June, while in 2015 the first egg was seen on 6 June! But the timing of egg laying is far less important than what George observed for overwinter survival and population size. Only 70% of the birds that bred last year are in the colony. About a third of this year's breeding pairs are composed of two birds whose mates died over the winter. There are now only 45 nests with eggs. There could be as many as 15 more but it is clear the breeding population will be less than the 85 pairs of last year. In 2016 there were 100 pairs. The only thing that is preventing an even larger decline in the population is the return of a rather large pulse (about 25) of the 2015 Cooper Island cohort. They have paired with widowed birds and not with each other. Immigration to the colon
Post a Comment
Read more
July 03, 2018
If you want to follow George Divoky's adventures in the field this summer, be sure to visit the following website: https://proteusscicomm.org/2018/05/24/arctic-summer-home-2-0/ Have a nice summer.
Post a Comment
Read more

NEWS FROM THE FIELD: Some glimpse of where Dumont d'Urville's snow petrels go at sea 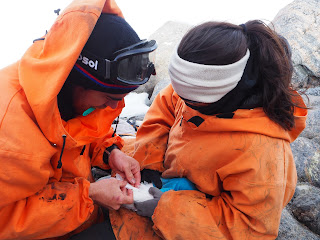 Two fieldworkers handling a snow petrel at the Dumont d’Urville station in December 2017. The snow petrel is maintained in a small bag and the GPS is about to be fitted on tail feathers. The handling time is reduced to a minimum (about 5 min) before releasing the petrel. The petrel is weighed before and after a foraging trip at sea, which allows to estimate its mass gain and how successful it was at finding food. Snow petrels are well adapted to this cold and windy environment (from -12°C to -5°C in summer), but fieldworkers need a good equipment to be able to work comfortably. Tracks of 4 adult snow petrels obtained during the incubation period using miniaturized GPS (less than 3 g). Petrels are breeding at the colony nearby the Dumont d’Urville research station and are equipped with small GPS just before they leave at sea for a foraging trip while the partner continues to incubate the egg. They remain at sea during 7 days in average and mainly forage within t
Post a Comment
Read more 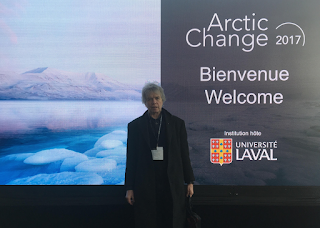 It was a pleasure for  SENSEI members George Divoky, Kyle Elliott and Christophe Barbraud  to host a recent topical session at the 2017 Arctic Change meeting in Quebec, Canada. The weather was bitterly cold and snowy, and it felt like the perfect place for an Arctic meeting.  One of the neat parts of Arctic Change is that it breaks down the 'silos', bringing together over 1000 Arctic scientists working across many different disciplines, so we had social scientists, health scientists and Inuit attending many of the talks. The topical session, held December 17 and 18, 2017, was entitled " Pagophilia in a world without ice: ecology of ice-associated wildlife in the 21st century " and included 11 speakers spread over two days, as well as several posters. Highlights included an interesting talk by Dr. Divoky showing the effects of ice loss on pagophilic Mandt's black guillemots, which have now lost their ice habitat, and a talk by Dr. Jeanniard du Dot on 'ice
Post a Comment
Read more

December 11, 2017
Hi all, This is the first post of the SENSEI's blog. Watch out for the forthcoming information on fieldwork reports, scientific publications, symposium and other events.
1 comment
Read more